What I’ve been up to since the last post… 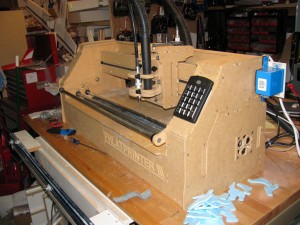 So, as you can see from the picture above, my Phlatprinter /// arrived from Phlatboyz right before Christmas, 2010.  This fact alone pretty much explains the delay in my updates to the blog and the lack of progress with the Push-E Cat V5 at this juncture.  Considering that the Phlatprinter is something of a linchpin to my plans for resurrecting Garrison Aerodrome, I hope that I’ll be excused for the distraction.

First off, I have to give props to Mark and Trish Carew of Phlatboyz.  As fledgling entrepreneurs, they rock.  Their team commitment to customer service and community building efforts are top notch.  They are doing their best to build a quality organization from the ground up and it shows.  When you add in their innovative product lines and well-thought-out designs, you can tell they are on the path to success.

Building the Phlatprinter /// was really easy.  In fact, it makes me ashamed that building a Push-E Cat can’t be as easy.  Then again, you don’t slam a Phlatprinter into the ground at 30 knots and expect to pick it up, brush it off, and then launch it again, so…but it was actually a lot of fun to put the unit together.

After it was together, though, was when the real learning curve kicked off.  First off, I had to accept the fact that the only way I was going to get parts out of it was to learn ANOTHER CAD program, which happens to be free but…anyway, that’s Google SketchUp.  Then I had to learn the hard way that the bastards at Google killed the DXF import feature of version 7.somethingorother of the free software.  This meant tracking down version 7.0 to use.  After that, there’s the script programs that have to be rounded up and installed into SketchUp in order to generate the G-code output that a THIRD program, CNCUSB, uses to actually drive the bloody machine.

I spent a lot of late nights banging my head on my desk (figuratively) following this path down to where I could actually export files (STL and DXF) out of my full-on CAD package into SketchUp and then out again to CNCUSB, but I did it.

Sadly, that’s when another set of issues cropped up.  See, the thing is that the Phlatprinter /// is actually a very new product.  This means there’s some teething issues, primarily in the main drive rollers.  There’s been a Phlat-community wide effort to resolve this issue and it does look like things are finally coming to a conclusion.  Unfortunately, it’s slowed down my learning curve and my drive forward to have the machine cutting my parts by now.  Heck, when you can’t trust the machine, you can’t really get a good feel for bits and feed rates and all the other minutia that CNC part cutting entails.  This means my frustration level has been getting the better of my usually calm demeanor.

Yeah, my kids and wife would say I’ve been something of a true bastard of a shop hermit lately.  This happens when your shiny new CNC machine keeps effing up stock with missed steps and whatnot.

I swear a lot when that happens.  There will be no apologies forthcoming for such behavior, either. 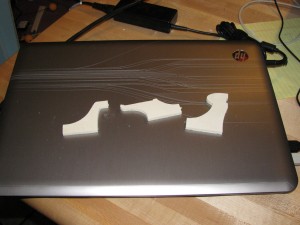 So, I’ve been spending a lot of time trying to make the PP3 make at least a few decent parts until such time as a decent permanent fix is codified and blessed by Mark and Trish.  Lately, that means by the time I wander back in and even begin to think of making a blog post, I’m too bushed to mess with it.

In any case, I do have a couple of successes so far.  I managed to cut a tool for holding 1/4″ lite-ply as it goes through the Phlatprinter.  I also managed to get a nice stack of acceptable motor mount middles out of the machine between fiddling with the main rollers in a vain attempt to deal with the missed X-axis steps. 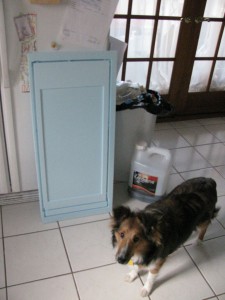 Still, for all my bitchin’, I’ve learned a lot.  I now know how to work the CAD to SketchUp to CNCUSB interface.  I understand more about how the various pieces of the Phlatprinter have to work together in order to assure a good cut.  The new HP laptop on my bench is a visual reminder of the lesson that you can’t use a netbook to cut 3D surfaces with CNCUSB.  Also, you must always remember to remove the power supply from the printer cabinet before you tilt the printer up to tighten the x-axis drive rollers.  I’m not sure how much more abuse the Z-axis mosfet on the driver board can take.

And thus I wind down to the end for tonight, waiting with bated breath for the “final solution” to the roller problem to be announced while plotting madly to cut everything except wing cores on this new tool.  That’s probably too ambitious and the PP3 really is more of a hobbyist’s tool than a production tool, but I’m still convinced that this one device (and any other family members I buy from Phlatboyz in the near future) will be stepping stones to whatever success I managed to eke out of this effort.

Darwin is a mechanical engineer and author living in the Fort Wayne, Indiana area. He is also the owner of Garrison Aerodrome R/C Model Enterprises.
View all posts by Darwin →
This entry was posted in CNC, News, Projects, Tooling. Bookmark the permalink.